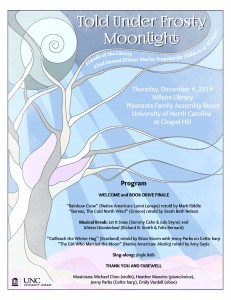 Story Squad met with nearly 30 environmental educators, teachers, and government resource people to share ideas about the benefits of storytelling in environmental education.   Conversation was lively, as we shared “pourquoi” tales (stories of why things are as they are) from around the world to show how stories, despite not being “factually accurate” by modern scientific standards, are perceptions of the way nature works.  Isn’t “science” the same thing…our current story about how nature works?  We’re constantly changing this science story as we gain new knowledge, so it’s not “fact.”  It’s just our best understanding at the moment.  Perhaps that’s what folklore is, too?  Our best understanding at that moment.  So, while we can’t necessarily teach science with folktales, we CAN offer children a vibrant new perspective on their world with these stories, and they can introduce basic STEM concepts that will help children look at their world with new eyes and deeper vision! Story Squad performed for the International Night celebration at Wiley International Humanities Magnet in Raleigh on May 9th.  Three storytellers shared tales from:

The kids thoroughly enjoyed the tales as part of the larger experience of International Night.