Story Squad director, Brian Sturm, shared folktales with 2nd graders at Northside Elementary school in Chapel Hill yesterday as part of their annual Readathon. Brian brought his guitar and shared African stories of Anansi (the original spiderman) and Abiyoyo the giant, in keeping with the celebration of February as black history month. Story Squad has received another gift from the Heineman Foundation for $31,000 to continue to explore the value of video storytelling for children.  We are immensely grateful for the continued support of the Foundation, as we work to enhance the content and create the design of our Folktale Storytelling Digital Library (FSDL) project. We have a vision for bringing folktale storytelling back to communities and schools and libraries across the nation to help motivate young children to pick up books and read, and this support will enable us to hire more student storytellers to create the video content, and an information science student to help us design the webpage and searchable web database that will be the backbone of FSDL. We are also creating a curriculum guide to help teachers understand the roles folktales can play in youth education and meeting the various curriculum standards within which teachers work.

Some of the students we have hired to join this project are in the picture on the right.  These students will bring a wonderful energy and an international perspective to the FSDL that should help young children “see themselves” in both the stories and the storytellers.  We are looking forward to a semester of productive (and FUN) work on this project.

Over 150 people joined in the annual Winter Stories tradition this year to enjoy storytelling of folktales from around the world, including Canada, Korea, Greece, Africa, and China. Cliff Missen did a marvelous job playing the Hausa/Fulani cow horn xylophone, and the children were enthralled by the buzzy sound it created.

Cliff told us that the ends of the cow horns are cut off and covered with spider webs to create that unusual sound.  ALL of the hot chocolate disappeared over the course of the evening and most of the candy and treats.  We heard from one happy parent that his four-year-old daughter lent over in the middle of the storytelling and beamed, “I LOVE this time of year!”  That’s what it is all about!

Thanks to all who made this another delightful evening of stories and songs. Please join Story Squad for the 25th annual Winter Stories program, “Toasty Tales & Hot Cocoa” on Thursday, December 7, 2017 from 5:00pm – 6:30pm in Wilson Library’s Pleasants Room.  There will be hot chocolate and sweet treats at 5:00pm, Hausa cow horn xylophone music at 5:15pm, and the storytelling and singalong program begins at 5:30pm.  This is free and open to the public, so all are welcome, but please know that very young children (under 3 years old) may not be able to sit still for the storytelling program.

Story Squad Director, Brian W. Sturm, was interviewed for UNC Campus Radio, WXYC 89.3FM in November, talking about the power of storytelling, the mission of Story Squad, and the place of story in modern life.  The one-hour show included a storytelling performance by Tim Lowry and an interview with William R. Ferris, professor of history, and it can be heard here; the Story Squad piece of the show is at the beginning.

The annual collaboration between the storytellers at the School of Information and Library Science and the UNC Morehead Planetarium has taken a “giant step” forward.  Past attendance at the event has hovered around 85 people for the past several years, but this year we shattered that number with over 218 in attendance and more than 40 turned away at the door for fire safety reasons.  This event seems to have finally gained the traction we have been hoping for, whether due to extensive publicity, marvelous storytellers, or social media engagement, we are not sure, but we reveled in a capacity crowd for the first time, and we are now wondering whether next year will involve two shows instead of just one.  We’ll await the planning meetings for next year.

This year we had six storytellers from the INLS 558: Principles and Techniques of Storytelling class.  Jeremy Frye told the Greek story of the fall of the titans as Zeus overthrows Cronos, and the first constellation of the She-Goat Capricorn in commemoration of her nursing Zeus as an infant.  Amanda Girelli kept the Greek theme going with the beautiful story of Orpheus using his lyre to appeal to Hades for the return of his beloved Eurydice, and the ensuing sadness when he looks back too soon and loses his love (the constellation Lyra represents his musical instrument).  Brianna Davis, then told a Japanese story of the Weaver Girl and the Cowherd, who fall in love and neglect their heavenly duties, inciting the Lord of Heaven to destroy the celestial bridge that connects the two lovers on either side of the heavenly river (Milky Way).  Once each year, he forms a bridge of birds so they can be reunited.  Jim Curry continued the Greek theme with the story of the Queen’s Vanity, a story that explains many of the fall constellations (Cassiopeia, Perseus, Cepheus, Cetus, and Andromeda); the story, briefly, is that Cassiopeia bragged she was more beautiful than the gods, who punished her by demanding she sacrifice her daughter, Andromeda, to the sea monster Cetus. Perseus saves her with the head of the gorgon, Medusa, turning Cetus to stone.  The gods them place Cassiopeia in the heavens but in a throne that circles the north star, so she is sometimes upside down in a most undignified position.  Ellen Cline then told a Native American (Assiniboine) story about the seven brothers who want to remain together always, and who choose to be stars.  Jessica Kincaid finished the evening with a Hopi tale about the Boy Who Went to the Sun to find out who his father was, creating a path (Milky Way) of cornmeal and seashells to get there.  The Sun says the boy needs to learn more and sends him back to earth, where he pays attention to everything and learns patience. On his next visit (traveling partway by comet), his father, the Sun, welcomes him.

Thanks to Amy Sayle, educator at the Morehead Planetarium, for coordinating and championing the event, and to all the staff at the planetarium who made it such a rousing success.  We look forward to next year and continuing this marvelous community tradition. Story Squad just finished a storytelling session in UNC Hospitals, in the hospital school and in the rooms with the children who couldn’t attend at the school. One child was in a lot of pain after whatever procedure he had to have to help him recover, and he was moaning and crying quietly to himself.  When I asked if he would like a story, I got no response, so I took that as an invitation to try.  I know that storytelling can help transport listeners to the story world, and I thought this might help him get over his pain.  So….I started out.  “Once upon a time, there lived a lion…”  After about 2 minutes, this beautiful child stopped moaning; after three minutes he was no longer crying, and when I left, he was quiet and drowsy, and ready to fall asleep.  I don’t know whether the effect lasted, but I do know that the storytelling took him out of his pain for the duration of the story. It’s not scientific evidence; it’s not research or generalizable, but it was certainly effective in this instance.  The power of story to enchant and take us out of ourselves never ceases to amaze me!  -Brian, Director of Story Squad

Brian Sturm, Director of Story Squad, spent 27 days this summer, touring eastern China and sharing the art of storytelling in public libraries with Chinese librarians and students.  He gave presentations and workshops in 7 different cities (Tianjin, Baoding, Shanghai, Fuzhou, Ningbo, Shenzhen, and Zhongshan) with the help of wonderful translators (university students and faculty colleagues).  He visited many children’s libraries (in China, they give children their own library buildings rather than a separate room or wing of a public library building) most of them younger than 20 years old and in beautiful, modern structures with whole floors for different collections.  Storytelling, despite a long history of marvelous Chinese folktales, is not a common practice in Chinese children’s libraries, so it was a delightful opportunity to try to generate excitement for this art form and share what Story Squad is doing.  “I hope,” said Brian, “that I might have the same impact on China that Marie Shedlock had on American public libraries in the early 1900s – to galvanize interest in public library storytelling.” Story Squad provided a storytime for the E. O. Young Jr. Elementary school from Middleburg, NC.  The children were treated to a Russian folktale about Grandfather Bear, a Jewish folktale that explains how things can always get worse than they currently are, and an authored picture book The Lion and the Little Red Bird by Elisa Kleven.  What a delightful group of children: good listeners, active participants, and creative thinkers.  One child gave storyteller, Brian Sturm, a run for his money.  After the stories were done, Mr. Brian commented, “you are the youngest college students I have ever seen!”  Having a different opinion of her future career goals, one little girl raised her hand and, when called upon, announced, “When I grow up, I’m going to be a doughnut!”  Now there’s imagination for you! 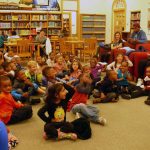 We just got word that the first box of books Story Squad helped deliver to Mzuzu International Academy in Malawi, Africa has arrived.  Mary Grace, our colleague there, posted the following on her blog: “The contrast between these books and the other donations we’ve weeded from the collections is stunning. It’s such a joy to receive and then pass along current books in great condition, worthy of the effort it takes to get things here.”  Story Squad is thrilled we could be part of this endeavor.